Sometimes, I’m just not very clever. The last two weeks in July, my wife, Wanda, and I are celebrating our 30th Anniversary in Hawaii. A few really glorious nights on the back-side of Oahu, and then nine nights on the Valley Isle, Maui. When we arrived in Maui, we set about purchasing our own snorkeling gear. Hawaii is really the only place we snorkel… warm water, amazing marine life, and… good company, but we finally decided not to rent any more. 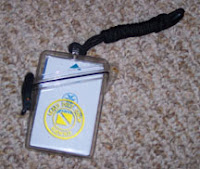 So we visited the Maui Dive Shop. And next thing we knew, we had snorkels, fins, diving masks (mine actually has corrective lenses), and a document safe. A document safe is a little plastic box with a hermetically sealed top (‘o’-ring and all) used to store critical documents on your person while you’re in the water… that way nothing important gets left in the car (to be stolen). Armed with my gear and my safe (safely keeping my driver’s license, credit card, and hotel room key), we swam into the waters just south of Kaanapali Beach… wonderful tropical fish, flora, and five or six sea turtles… really close to shore. It was a delightful afternoon.

Sometimes, I’m not very clever. I had stowed my safe in the back pocket of my swim trunks… the one with the zipper. I knew the safe was still there, ‘cause the pocket was heavy. Yep… reached right back there, and came up with a handful of… sand. It’s probably best if you zip the zipper… Yep… not very clever!

Well, we searched around the beach, and Wanda even swam out with her gear to search, but… nothing… nada. We went back to our condo and called the credit card company. “No problem sir! We’ll cancel the card and send you a new one by express… it’ll be there in three business days!” Well, at least that was reasonable.

Then there’s the matter of the driver’s license. It seems that getting a replacement is a simple matter, you just fill out a form and show up, in person, at the DMV office, pay the fee and voila… in two weeks you get a new photo ID. Photo ID… did I mention that we flew to Hawaii? It seems one needs photo ID to do things like board airplanes. This could be interesting… Oh… did I mention that the day after we get home, I need to fly out of state on business, and rent a car? It seems you need a driver’s license to rent a car.
Photo ID in two weeks. Yep. Sometimes I’m not very clever.

Wanda and I prayed. We asked our friends (via phone and e-mail) to pray. We prayed some more. And some more.

Fast forward two days. We’ve returned from an afternoon of snorkeling (Nope, didn’t have a document safe… didn’t have anything to put in it!). The phone rings, and it’s the lady at the front desk. She tells me that someone has found my safe, in tact, and has left her name, phone, and hotel information so that I can go claim it. I called Terry and she indeed had found my stuff. Since the hotel key was in it, she called to see if we were here. We were. We made arrangements to go over to her hotel… picked up a bottle of California sparkling wine (a nice Domaine Chandon Etoile), and headed out. 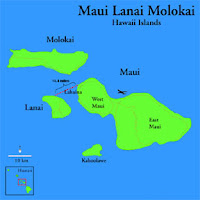 Met Terry and her husband rich in the lobby of their hotel on Kaanapali Beach. As you’d imagine, we asked where they found the little box. Apparently, Rich found it that morning at a place called Shipwreck Beach… on the island of Lana’i, across fourteen miles of open ocean channel. Seems they took the ferry 45 minutes to the neighboring island, took a tour bus to the top of same, and then rented a jeep, and drove down to this beach. Apparently, it’s not much of a swimming beach, but before they left, they wandered over to the water, Rich looked down, and there was my little box, having sailed itself across the sea. 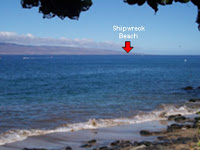 Some might say, “What a coincidence!” Me, sometimes I’m not very clever… I’d just say God is unabashedly awesome!

Thanks Lord! (And I hope Terry and Rich enjoy the Domaine Chandon!) This picture is taken from where I lost the 'safe.' You can see where it was found in the distance.
Posted by Old_Guy at 1:20 AM 6 comments:

Two facts spring (at least for me) from the page... one, as the 10 year-olds note so well, "Then Jesus wept." When confronted with the pain and anguish of Lazarus' sisters and neighbors, I believe His heart overflowed with compassion, and He wept with them. This short, tiny verse speaks volumes about the heart of our Lord, and his true empathy with, and compassion for us.

John also tells us that Jesus was angry. Verses 33 and 38 attest to his ire -- so we're left with a question for the next post... Why was Jesus angry?
Posted by Old_Guy at 7:01 PM 3 comments: