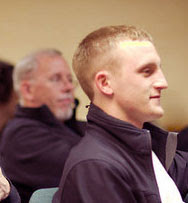 Having discussed the place of the human father in his young son's life... the place that belongs to God, it's clear that the human dad becomes faced with some interesting challenges as his son grows and matures. As the boy reaches adolescence, manhood in the Jewish tradition, his relationships begin to evolve and to change...

The sweet boy who kissed his dad goodbye when dropped off at school, now would just as soon have dad "drop me off a couple blocks from school." There are mood swings, awkwardness, and... hair(!) as hormones begin to kick in; and junior is no longer firmly rooted and attached to his family and the individual members thereof. In fact, one of the major challenges a youth faces during this tempestuous time is separating himself from his family and establishing an independent identity of his own. As his peer relationships become the most important in his life, the residual members of his family feel literally pushed away. For a mom and dad who've always been close to their beloved offspring, this can be challenging at best, and very painful at worst (depending on how hard junior pushes). All parties concerned often feel that the others "just don't understand." And to some degree, that is true.

It's just impossible for someone who has not raised a son or daughter to really know the depth of the bond of love that often grows... after all, this bond was created and is modeled by God (Matthew 3:17); to feel that bond being pulled apart can indeed be traumatic, and the "new man," at age thirteen, fourteen, fifteen, or sixteen has no context to really comprehend the impact of his independence or even rebellion. Likewise, although almost all parents survived their own adolescence, their experience and the context in which they grew up is often not really analogous to that of their offspring... they may well not be capable of understanding the son's difficulty and/or angst either. And the trust, often painstakingly established over the course of childhood is often eroded through misunderstanding, and poorly defined and enforced boundaries... and the separation between family and child, between father and son is... hard.

The point here is not to suggest that it can be easy (oh, sure, miracles DO happen on occasion), but that as our sons grow and seek to establish an identity apart from the family, that both parties-- son AND father have important and key roles and responsibilities. As the son grows and 'pushes back,' the father's role does not diminish... it evolves. As the son is establishing himself as an individual, as a man, the boy still has a critical need for validation, and, although he may not recognize it, guidance and support as he makes choices. This process is not instantaneous; great insight and sensitivity is required from both the son and the father if their contributions to it are to be truly complementary. And dad, what your son needs is solid advice and supportive reasoning, not evaluations, or worse, condemnation. Caveat: of course there must be boundaries, and the possibililty exists for poor choices. The need for damage control will arise, in some form or another... and both of you... both of you will need to recognize that of youreselves, you can do nothing (John 15:5). There's another player... a key player: the Heavenly Father that created you both.

Which, after a lengthy introductory discussion brings me to the point... it does get harder. It gets harder because one of the most important tasks a human father needs to accomplish is to evict himself (perhaps over time) from his occupation of the role of God in his son's life -- in order to make room for the son to establish a real and lasting relationship with his Heavenly Father. Done well, the human father's tennancy in this role has shown the boy what love, and justice, and compassion, and understanding look like, maybe not in perfection, but in honest faithfulness to our Heavenly Father. Done, not so well, the son will have perhaps, a somewhat skewed vision of his Lord. The really good news is that once the link between Father God and His beloved son is forged, and no matter how severely it is strained and tested, God won't let go. And with prayer from human father and son, the new 'adult' relationship between the young man and his Father will grow and will flourish... over the course of a lifetime.

The boy's human father continues to hold a key place and a key role in his son's life. He must still provide advice and counsel. He needs to get out of God's place, yet he must still set an example through his own relationship with God. He must still cover his own beloved son in prayer as the young man matures in life and in Christ. How does he go about doing all that? Perhaps another chapter...
Posted by Old_Guy at 6:31 PM

This is an interesting topic, and I admit I haven't thought much about it. I'm sure my appreciation and admiration for my dad will grow when I move out and realize what how he dealt with this.